The last rhinoceros cow in Krugersdorp park, South Africa, bled to death on Wednesday after poachers hacked off her horn 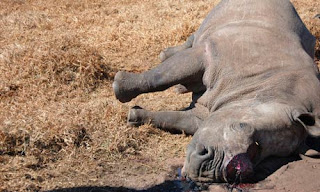 [Reuters photo] Quoting from the Observer article Wildlife officials in South Africa say poaching in the country is at an all-time high: Already 136 rhinos have died this year, after 129 died in all of 2009.
"The exercise takes them very little time," Mostert said. "They first fly over the park in the late afternoon to locate where the rhino is grazing. Then they return at night and dart the animal from the air. The tranquilliser takes less than seven minutes to act.
"They saw off the horns with a chainsaw. They do not even need to switch off the rotors of the helicopter. We do not hear anything because our houses are too far away. The animal dies either from an overdose of tranquilliser or bleeds to death."
Posted by Jan Rifkinson at 18:35