ALL HAIL THE UMBRELLA GUN

In 1978, Georgi Markov was on his way to work at the BBC in London when he felt a sharp sting on his thigh. Behind him, he saw a man picking up an umbrella. The man, who spoke with a foreign accent, apologized and hurried into a cab that whisked him away.

That night Markov came down with a fever; four days later he was dead from ricin poisoning. A medical examiner found a tiny pellet, less than 2 millimeters in diameter, in his leg. Markov, a dissident novelist who had defected from Bulgaria, had been assassinated. Based on the details he remembered before he died, investigators developed a theory of how he had been shot.

That umbrella, they thought, was not a normal umbrella, but one that had been transformed into a gun.

Umbrella guns are by no means the only type of disguised weapon. “Man has attempted to disguise firearms into just about everything you can possibly imagine,” says David H. Fink, a collector in Georgia who has written about disguised guns for the American Society of Arms Collectors. Guns have been hidden in pillboxes, a scribe’s casing, a flute, a pencil, a Pepsi can. There have been pocket-watch guns, ring guns, bike-pump guns, and lipstick guns.

But perhaps no other type of disguised gun has caught the imagination of spies, writers, and conspiracy theorists as the umbrella gun. As a weapon, it is both a little bit ridiculous and deviously clever, and since its use in Markov’s assassination, it had taken its place in the villainous weapon hall of fame.

The umbrella gun was invented in the 19th century, as a variant of the more popular cane gun. First patented in 1823, cane guns were relatively simple weapons, disguised to look like walking canes—a gentleman’s weapon. The umbrella gun took the same idea and applied it to another personal item.

The earliest extant example of an umbrella gun may be one in Fink’s collection, dated to 1860. The umbrella was made in London and marked “Armstrong reg. British Make.” The handle has its own marking: “Richard Grinell 1860.” (Grinnell was probably the owner.) The shaft of the umbrella is actually a rifle.

Fink also has a different type of umbrella gun in his collection, from 1892. In this design, the umbrella shaft itself isn’t a gun. Instead, it contains a small revolver that slides in. To fire it, you pull the gun out of the umbrella’s top.

“These two are the only two honest umbrella guns I’ve seen, and I’ve been collecting for over 50 years,” Fink says. “The survival rate of these things is not very good. The guns may survive, but the umbrellas fall apart.”

In the first part of the 20th century, umbrella guns got little play: in 1917 Popular Science described a “toy gun for the pacifists,” that would shoot an umbrella instead of a bullet, and in 1928 Popular Mechanics described how to turn an old umbrella into a spring gun. The most famous user of the umbrella gun, up until the 1970s, was the Penguin, the portly, besuited supervillain of the Batman comics.

In his first appearance, in 1941, the Penguin carried an umbrella with a hollow shaft, which he used to steal art, and Batman soon discovers that his enemy has a giant collection of inventive umbrellas, including one that fires poison gas. Over the many reinventions of the Batman universe, the Penguin has hidden all manner of weapons in his umbrellas, including a flame-thrower and a machine gun.

In the 1960s, though, American intelligence agencies were developing real-life versions of the Penguin’s sneaky weapons. The CIA reportedly created a stun-gun umbrella that would shoot poison darts from its tip, similar to the umbrella used to assassinate Markov.

That umbrella, sometimes called the “Bulgarian umbrella,” may not have technically been a gun: it didn’t work by setting off gunpowder. The tiny pellet that killed Markov might have been stabbed into his leg using compressed air, a hypodermic needle, or another injecting device. The gun itself was likely designed by the KGB for Bulgaria’s secret service.

After the “umbrella murder” became famous, the umbrella gun enjoyed a bit of a renaissance in the popular imagination. One theory about President John F. Kennedy’s assassination centered on an umbrella gun. In 1985, a company called J. Wilson built a very classy model. On television and in film, the umbrella gun became a more common murder weapon and spy tool; most recently, Colin Firth was equipped with a multifunctional umbrella gun in the 2015 movie Kingsman: The Secret Service—a homage to the umbrella wielded by superspy John Steed in The Avengers, which had a sword hidden inside and, at least once, poison gas.*

Outside of fiction, though, umbrella guns are still relatively rare, although in 2014 a man in Seattle was charged with using a rifle “stuffed into the sleeve of a Nike golf umbrella,” reports SeattlePI. At this point in the history of the umbrella gun, it’s more of a cliché than a clever trick: if anyone suspicious points the tip of an umbrella at you, you know to watch out.

Source: atlasobscura.com, Written by Sarah Laskow
Posted by Jan Rifkinson at 08:59 No comments: 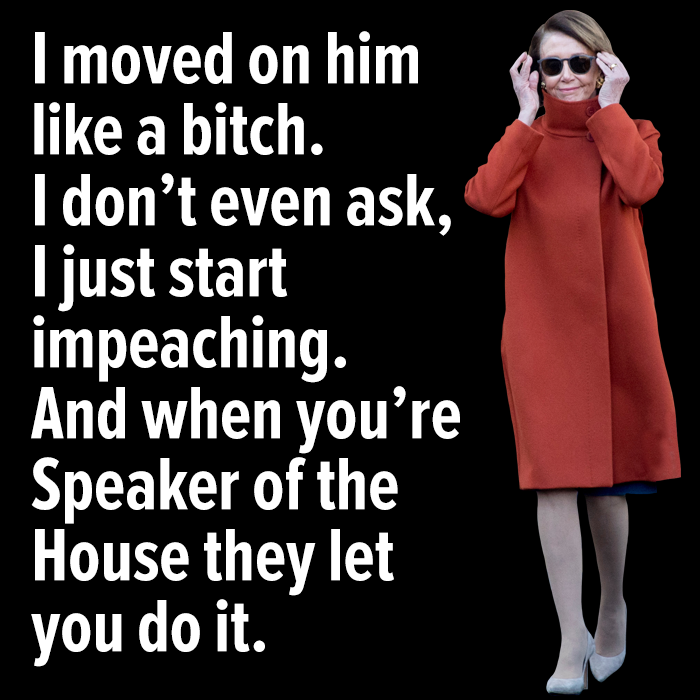 Posted by Jan Rifkinson at 18:24 No comments: 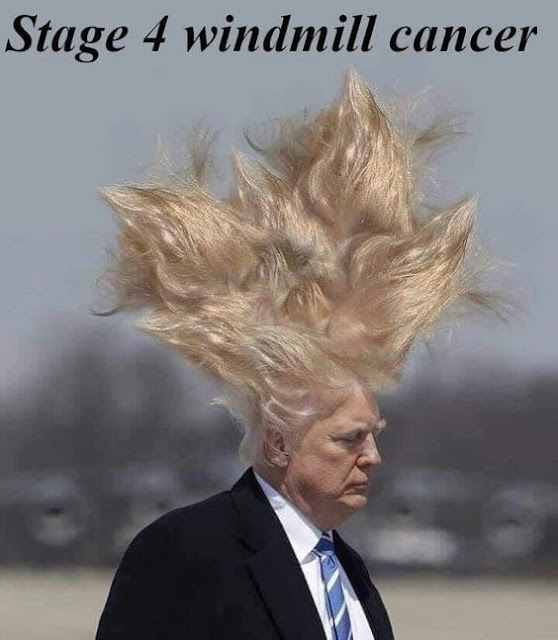 Posted by Jan Rifkinson at 14:25 No comments:

A WORK IN PROGRESS

Posted by Jan Rifkinson at 09:19 No comments:

IT'S ALL IN BLACK& WHITE 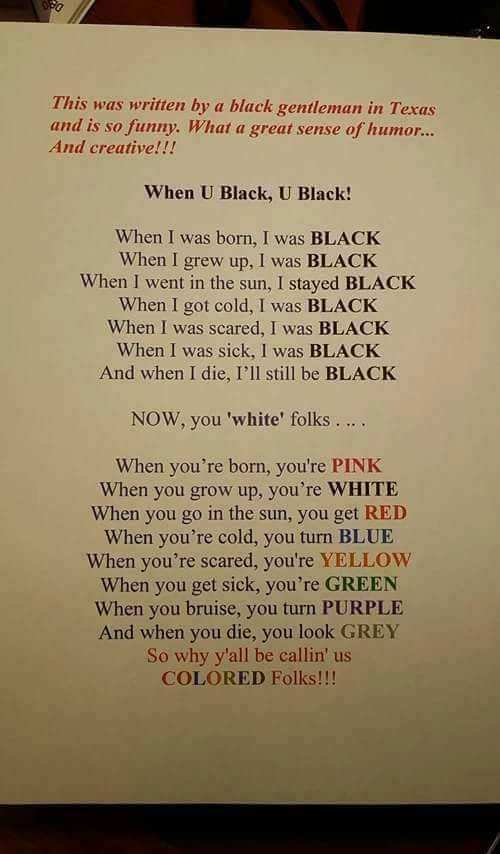 Email ThisBlogThis!Share to TwitterShare to FacebookShare to Pinterest
Labels: 2019, humor 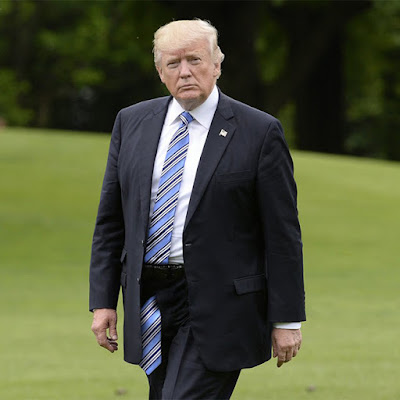 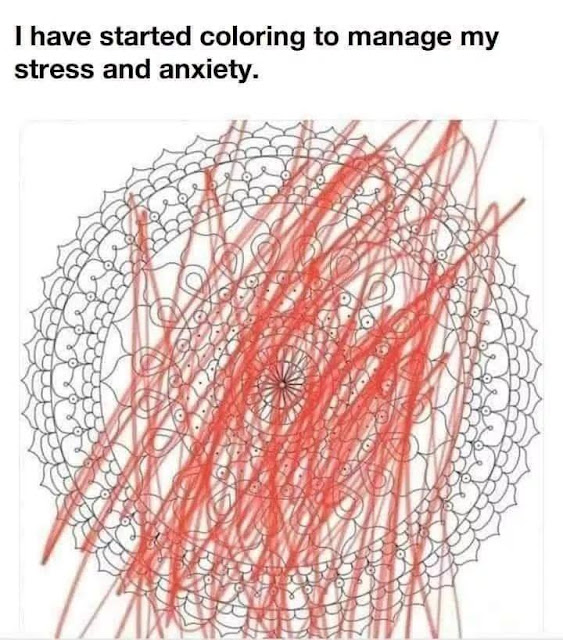 Posted by Jan Rifkinson at 09:02 No comments: 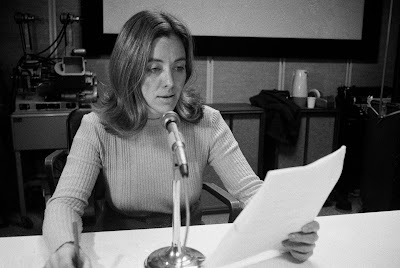 The broadcast journalist Sylvia Chase in 1974, when she was with CBS. Over her career she also worked at ABC, PBS and KRON-TV in San Francisco.

Sylvia Chase, an Emmy Award-winning correspondent whose professionalism and perseverance in the 1970s helped a generation of women infiltrate the boys club of television news, died on Thursday in Marin County, Calif. She was 80. Her death was confirmed by Shelly Ross, a former network news colleague, who said Ms. Chase had undergone surgery for brain cancer several weeks ago.

Ms. Chase was one of a number of correspondents hired by network and local television news departments — along with Connie Chung,  Cassie Mackin ,  Marya McLaughlin , Virginia Sherwood, Lesley Stahl and others — at a time when women were striving to be taken seriously and to defy being typecast as eye candy for male viewers.

While they had been preceded a decade earlier by pioneers like Marlene Sanders, Ms. Chase and her contemporaries were members of a freshman class still more concerned with getting into broadcast news on the ground floor than worried about being passed over for promotion later on because of a glass ceiling.

Bill Moyers, who worked with her on the PBS series “Now With Bill Moyers,” said in an email that Ms. Chase “would quit before giving in to a less-than-honorable higher-up who insisted on compromising a story, and she was a breakthrough pioneer for woman in journalism and in coverage of kids in need.” He added, “In the internecine conflicts at either CBS or ABC — between journalists trying to get it right and brass playing it safe — she had your back because she knew you would have hers.” 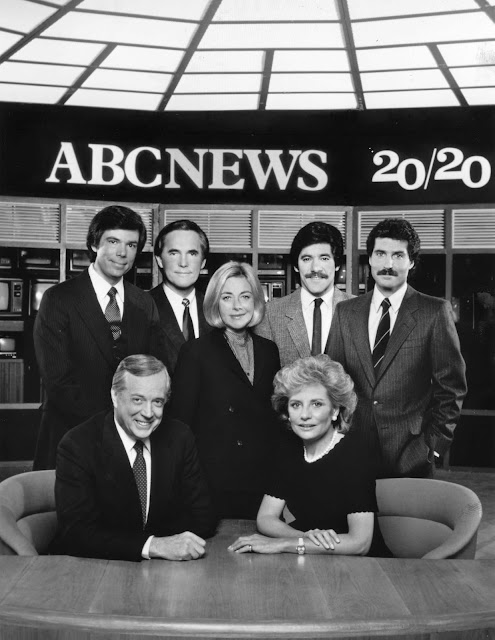 Ms. Chase was an original member of the reporting team for the weekly ABC News magazine “20/20”; a correspondent for another ABC News series, “Primetime”; and the producer and host of a daytime program for CBS, “Magazine.” She also anchored the nightly news on KRON-TV in San Francisco.

She broke ground on topics like sex abuse in the workplace and in prison. She also reported on a diet pill that was linked to lung disease; a treatment program for drug-addicted musicians; an epidemic of diabetes (a disease that she endured herself) among Native Americans in New Mexico; racism in law enforcement; and publicly funded programs that provided horrific care for disabled children.

She won the Alfred I. duPont-Columbia University and George Foster Peabody awards and shared an Emmy in 1978 with her producer, Stanhope Gould, for a report on exploding automobile gas tanks. TV Guide once called her “the most trusted woman on TV.” Sylvia Chase, center, in 1983, was a 20/20 correspondent along with, from left, Bob Brown, Tom Jarriel, Geraldo Rivera and John Stossel. Hugh Downs and Barbara Walters anchored the team

Sylvia Belle Chase was born on Feb. 23, 1938, in Northfield, Minn., to Kelsey David Chase and Sylvia (Bennett) Chase. After her parents divorced, she was raised by her grandmother in Minneapolis. The grandmother was listed in census records as the custodian of an apartment house whose tenants included Sylvia’s aunt, a radio announcer.

Sylvia’s first broadcasting job was reporting on junior high school doings for a show that she and her older sister produced for local radio. “People said Sylvia was ‘tough,’ but in fact it was principle that prompted her to stand her ground,” Mr. Moyers said. She was, he said, shaped by the New England liberalism of Northfield’s founders and by its good Samaritan heritage. (The town’s local hero was a banker who in 1876 refused the James-Younger gang’s demand to open the vault because he would not betray the trust of his fellow citizens.)

Ms. Chase earned a bachelor’s degree in English in 1961 from the University of California, Los Angeles, taking two extra years to graduate because she was working her way through college as a receptionist. Her brief marriage to Robert Rosenstone, a history professor at the California Institute of Technology, ended in divorce. Complete information on survivors was not immediately available.

She lived in Belvedere, Calif. Ms. Chase worked for Democratic legislators and candidates in California in the 1960s until she was hired by the Los Angeles radio station KNX. In 1971 she joined CBS News in New York, where she wrote and narrated a new radio series, “The American Woman,” which replaced the on-air advice column “Dear Abby.”

She was later a correspondent on the “CBS Evening News With  Walter Cronkite .” Ms. Chase was hired by ABC News in 1977 and was a correspondent for “20/20” from 1978 to 1985. KRON promoted her return to California in 1985 with billboards proclaiming, “The Chase Is On.” “I resolve to raise public awareness about two issues,” she told The San Francisco Chronicle in 1988: “the perils facing California’s children and the growing crisis in caring for AIDS patients.”

Chase left San Francisco in 1990 and returned to ABC in New York. When her contract was not renewed after the network retrenched in 2001, she moved to PBS, where she narrated a documentary series titled “Exposé” and joined “Now With Bill Moyers” as a correspondent.

In 1973, during the Watergate scandal, Ms. Chase was determined to get an interview with President Richard M. Nixon’s younger daughter, Julie Nixon Eisenhower, who was emerging as one of Nixon’s foremost public defenders. She revealed her successful strategy to Savvy magazine. “The basic rule is not to take ‘No,’ ever,” Ms. Chase said. “Call again and again, every day.”
Posted by Jan Rifkinson at 09:00 No comments:

Posted by Jan Rifkinson at 10:07 No comments:

A PRETTY GOOD LIST OF MY 2018 READING DOWNLOADED FROM AMAZON 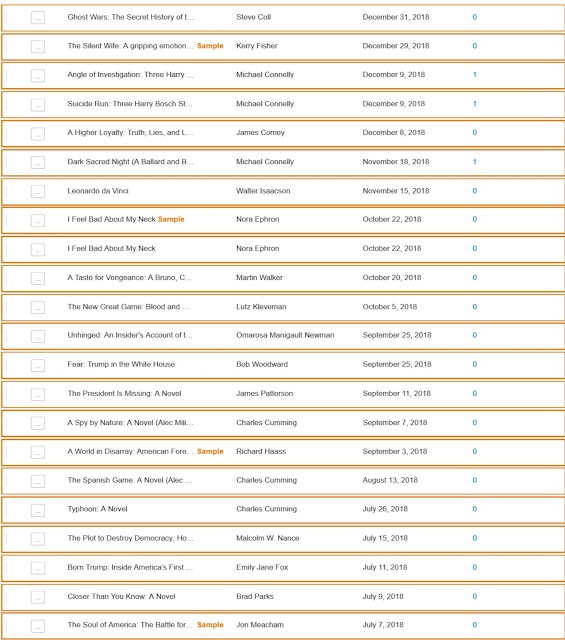 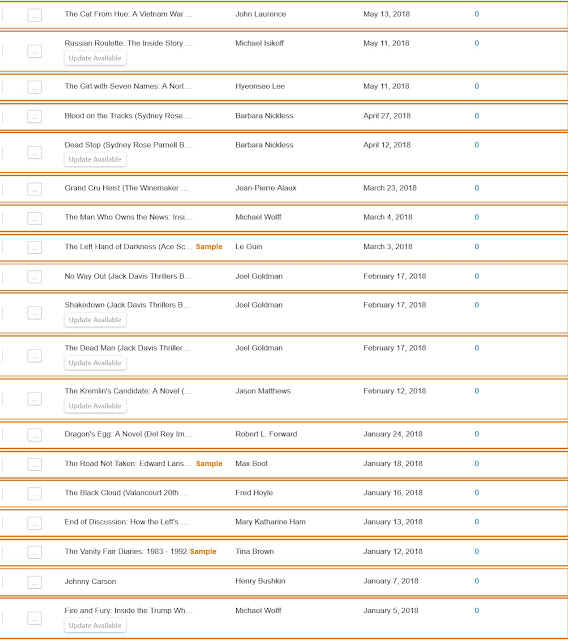 Posted by Jan Rifkinson at 11:50 No comments: