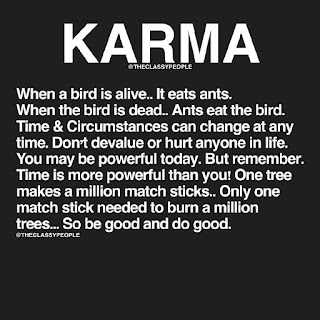 Posted by Jan Rifkinson at 10:05 No comments:

Email ThisBlogThis!Share to TwitterShare to FacebookShare to Pinterest
Labels: philosophy

Whatever happened to the word "gravitas"? I haven't heard it used once this political season. Is there any wonder?
Posted by Jan Rifkinson at 10:01 No comments:

Email ThisBlogThis!Share to TwitterShare to FacebookShare to Pinterest
Labels: 2016, politics 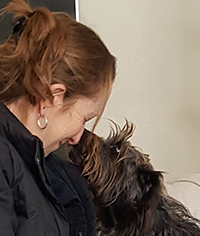 Around noon, Saturday, February 20th, Stella came trudging into the kitchen which meant she wanted to go out so I opened the door, watched her stretch, look around somewhat casually, then carefully amble down the 2 shallow steps onto the grass. She liked to make this trip by herself so I usually followed her progress through the windows. For some reason, I didn't this time.

Stella's walk was a short one: after bathroom activities, taking a left, walking along the side of the house, another left, up the terrace steps, back into the house. This does not take long. Sometimes, along the way, she would stop to bark at the neighbor's black, midget dog. Otherwise it was an uneventful little stroll.

But when I sensed this day's trip was taking a little too long, I went out to find her standing unsteadily, dazed, facing the wrong direction, lost, swaying from front to back. Clearly she had had some kind of catastrophic episode. Heart attack? Stroke? Brain tumor? A week ago, her blood values had been perfect.

Not wanting to startle her, I approached her sideways until I was able to reach out & touch her. Somewhere in her depths, despite her condition, she seemed to recognize me. I could swear I saw a sigh of relief.

I attached Stella's black and white polka dot lead, and ever so gently, led her onto the right path. She followed me into house, to her safe spot where I sat on the sofa right next to it. This usually comforted her enough so she would lie down.... which she did, in slow motion, onto her side, falling into a deep sleep.

Hours later, her body clock announced it was feeding time & Stella came to the kitchen, very weak & limping badly. But she refused food & water. She refused a pain pill wrapped in smelly, delicious, Boar's Head genoa salami -- sliced thin. So I reversed her path where I sat on the sofa again & Stella lay down again. There I remained. There she remained.

Through tears, I grew to accept that this was to be the end so I left a message for Dr. Krier, notifying her of Stella's situation and, via text messaging, we decided that, since Stella was resting comfortably and apparently not suffering, we would wait for the morning unless there was an emergency.

I spent the night with Stella, checking on her condition many times during the night. Her breathing was so shallow.

5:45am, Sunday, February 21st: Ziggy wanted to go out so I took him for a quick walk while Stella snoozed. But on my return, I found Stella standing blank & lost just a few feet from her safe space. Again her internal clock told her it was time to go out. But she couldn't make it so I coaxed her back to her padded area where we both remained until Dr. Krier arrived later in the morning.

When Dale (Dr. Krier) arrived, after hugs, we sat around and talked; everyone knowing what was before us. She pointed out what a blessing it was when our canine friends let us know it was their time, making it easier for us to do what we had to do. I suppose but it is still tough. 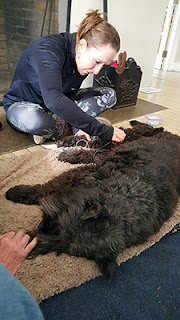 I remember the first time Truman & I met Stella with Kathy Dawson in Baltimore MD. Stella was terribly shy. Constantly anxious, it seemed we could never make her feel totally safe even over the ten years she was with us.

At first, she buried her biscuits for a later snack when no one was looking. She hollowed out spaces behind bushes around the house where she could hide. All her life with us (starting at age 7) and continuing for the next 10 years, she always required a safe space; a crate, a corner, a sofa. When, finally, she couldn't jump any more, we spread towels & pads & blankets on the floor between the sofas where she would feel safe and that's where she lived for the last two years. 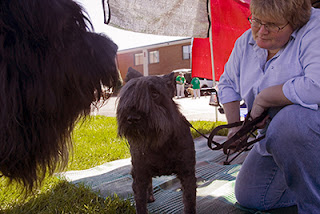 Stella never played, never wagged her tail, never kissed, never walked toward me but I could always count on her being behind me.

She never took treats from strangers & towards the end, even required that I put treats on the floor for her to pick up at her leisure. From the start, Sophie always respected Stella but Ziggy got his 'what for' when he got too frisky with her. Sometimes she barked at a stranger approaching the house -- usually me. I'd like to think it was a happy, welcoming bark but I doubt it. 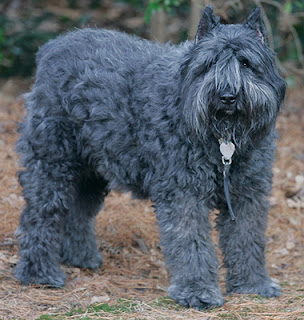 Stella never got over the traumas from the first six years of life -- whatever they were. I'm told she was used as a brood bitch in a Missouri puppy mill. Supposedly, she birthed 6 litters and the only time I saw her really excited was when a vet tech friend stopped by with her rescued Chihuahua and Stella thought it was a puppy. 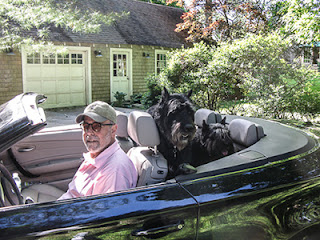 But she traveled with me to Bouvstock & other Bouvier events where she never let me out of her sight. She hiked with me & Sophie in Ridgefield's parks -- Sophie leading, Stella following. 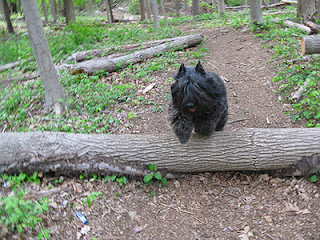 She joined us at restaurants with outdoor venues for lunches or dinners. She hung out with me when I dipped my toe into local politics and ran for selectman. She helped me hand out pamphlets in front of Stop 'n Shop. She got used to riding in the car after a rough start of peeing & drooling on the back seat. She loved the snow.

In the ten years she was with us, I never heard her whine or cry out in pain. She never demanded anything of us. But we tried our best to give her everything we could. I hope now, finally, she's at peace. I know her official kennel name but I prefer to think of her simply as

Lower Back Pain -- Most of Us Have It.

Posted by Jan Rifkinson at 17:56 No comments:

Email ThisBlogThis!Share to TwitterShare to FacebookShare to Pinterest
Labels: back pain, health, medical

From My Memory Bank - How 60 Minutes Come to Be

During the early years of my time in TV news, I was fortunate enough to know and work with Mike Wallace, Harry Reasoner, Don Hewitt and others in later years.
But how did 60 Minutes come into being?
Fred Friendly was CBS News president at the time. Don Hewitt, respected news gadfly, had finished a documentary on Frank Sinatra (I think the first on Sinatra). Included were never-before-seen footage of Sinatra cutting an album in real time, his back stage entrance onto the MSG stage, his performance, Sinatra's bio and more. It was a great doc but Fred Friendly wouldn't put it on the air because it wasn't "news".
I was in the main newsroom to hear the Hewitt side of his conversation with Fred Friendly on the subject. To say the least, it was a loud conversation.
As a result of that conversation, Don was banished to the rear of the production center -- a former dairy between 10-11th ave on 57th St. That's where all the film projectors & telop machines were housed. Believe me, it was a remote part of the building. His secretary was one Suzanne Davis, a brilliant girl, who -- in a 6 degrees of separation moment -- turned out to be my college girlfriend's roommate.
Months, probably more than a year, it was rumored that Don was working on a new project. One day, in the hallway outside the Evening News studio-newsroom, Hewitt asked to borrow my stop watch, a new split second Heur.
By the time '60 Minutes' debuted, Fred Friendly had resigned over principle and Dick Salant (also a wonderful but very different executive) had replaced him. Don Hewitt and '60 Minutes' had found an ally on executive row.
Lo & behold, Don had filmed my stop watch running for a full 60 minutes and, of course used it (in actual time) as a logo & bumpers between segments on his new show. The original anchors were Wallace & Reasoner.
That's how '60 Minutes' came to be.
Posted by Jan Rifkinson at 15:34 No comments: